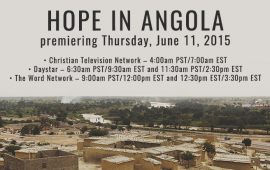 We are thrilled to announce the world premiere of a very special television event, Hope in Angola. The program will broadcast nationally as a special presentation of the Today with Marilyn and Sarah   show on Thursday, June 11 and Wednesday, June 24. The program invites viewers on a journey through Saving Moses’ malnutrition ... Read More»

Meet Marcella and Belito. In 2010, Belito’s malnourishment was severe, and Marcella was losing hope. Watch Belito’s video to hear the rest of the story… Each year, we witness needless deaths caused by malnutrition. Angola has one of the highest under-five mortality rates in the world. Almost one child out of every five will not... Read More»

I had the amazing privilege to travel to Angola with some of the absolutely coolest people in the world. We did outrageous work with Saving Moses! I was surrounded by wisdom, passion, dedication, creativity, golden hearts, and indescribable devotion to our mission. My new friend, Kyle, is entirely rocking the video scene – he takes... Read More»

I’m taking a pause here in Angola, sitting on the ledge in one of our malnutrition clinics for Saving Moses. I’m pausing for lots of reasons, one of which is to have a few minutes to absorb & process. I can get so thick in the middle of all of these babies & moms that... Read More»

I’m in Angola finishing up our first day – there have been highs & lows. At our first stop, we hopped out of the car only to only to come face-to-face with a baby who just died and meet her mom who was just shattered. I’ve landed at this clinic too many times to come... Read More»

Consider this your official invitation to participate in a survey all about you! Because your feedback is as valuable to us as our partnership with you is, we are asking our faithful friends, and partners to take five minutes (or less) to communicate with us what is important to you! [Insert button “Take Our Survey... Read More»

Nothing excites us more than the opportunity to save more babies! For the last month or so we have teased the news of a new program in a new nation… We are pleased to finally make the official announcement! In 2015 we are expanding the reach of our life saving efforts in the nation of... Read More»

What is hope? That might seem like a simplistic question that leads to a well-defined answer, but is it really? What is hope to an Ebola orphan who has lost parents, and possibly siblings to the epidemic? What does hope look like to these precious lives after they have been discarded by friends, neighbors, and... Read More»

It’s exciting to think of new beginnings! They offer a chance to start fresh, to gather our acquired experience and knowledge, and apply it to new projects, new events. It’s exciting to plan for the days ahead! New beginnings give us the chance to dream, to change, and to set goals! Here at Saving Moses... Read More»

A Resolution For Ebola Orphans

Friends, we are just days away from celebrating the beginning of a New Year! As we look forward to the year ahead, let’s also consider the value of life. The value of your life and the power you hold to really make a difference. You might have read that and thought, ‘what could I do... Read More»