A guest post by Stephanie Drawdy, a Team Trip Volunteer from the summer of 2019.

There is a Southeast Asian community that once lived in a slum known as Plankville. Its citizens lived high above running sewage and maneuvered in and out of their homes on rickety boards that often gave way. Some, including little ones who had just learned to walk, would oftentimes fall into the refuse. So, when this community was relocated to a concrete underpass surrounded by weaving lanes of heavy traffic, this was considered an upgrade.

When I first stepped out of the tuk-tuk to visit this area, my senses were jarred. There was a stench in the air that is inevitable when the heat of Asia meets the corrals of toilets that line one wall of this community. Flickering light danced on the muddy narrow path leading into this village cluttered with trash and overpopulated with need. The mix of massive trucks and tiny mopeds, heavily laden with all manner of baskets and people, whizzed past. The cacophony of the passing engines creating a fitting soundtrack for the disturbing existence to which I bore witness. 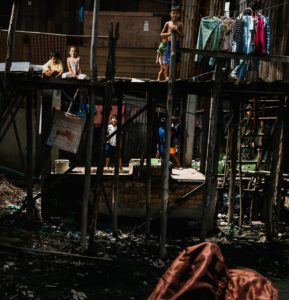 A gray film covered everything, from the rows of hand-washed laundry hung out to dry on makeshift lines to the rows of toddlers who called this place home. Their little heads popped out from behind blankets nailed to the entrances of cave-like homes and from behind concrete columns towering above our heads. One set of bright, dark eyes blinked at me. Then another. And another. Soon, a jovial brood had gathered – some smiling mischievously as they vied for attention; some hiding shyly behind their siblings. They paused, and then ran barefoot ahead of me through puddles of muck, looking over their shoulders as if to say, please follow. And so I did. 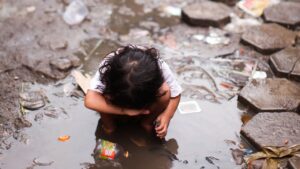 Turning the bend, I watched as this boisterous flock crawled onto the edge of the underpass and perched themselves beneath an improvised tent of tarps, sticks and string. Here, we played. And laughed. And spoke a language that needed no words. Older boys and girls flipped tiny decks of cards with impressive dexterity while the younger ones leaned in to watch. I watched too, as an overload of thoughts, emotions and concerns flashed through my heart and mind. At that moment, I fell in love with this ragtag bunch of Batman emblems, peace symbols, and endearing smiles.

When it was time for the group I was with to press on, one little boy, wearing only a long red American t-shirt, followed close behind. His bare feet and petite face were beautiful, yet marked with the filth of the underpass. He had held tightly to a small green toy truck and trailed it along the edge of a worn table as we played. The twinkle in his eyes and the playful giggle exuding from his belly belied his surroundings. He didn’t yet know the magnitude of lack he was borne into, the utter despair that his “facts” predicted for his future.

The adults in that community have a sense of acceptance – they see no turn for the good on their horizon. Yet, they hold out hope for the next generation. They care for them with a loving tenderness. They give them everything they have, which is mostly love.

The despair emanating from that underpass was palpable; the need for hope and vision overwhelming. This is given one person at a time. And, Saving Moses is in the midst of communities like this doing just that – acting as a haven of hope to offer a different reality to babies and toddlers like my sweet little friends from the underpass. Saving Moses plants seeds of hope and vision into the future of the developing world, one unique soul at a time.